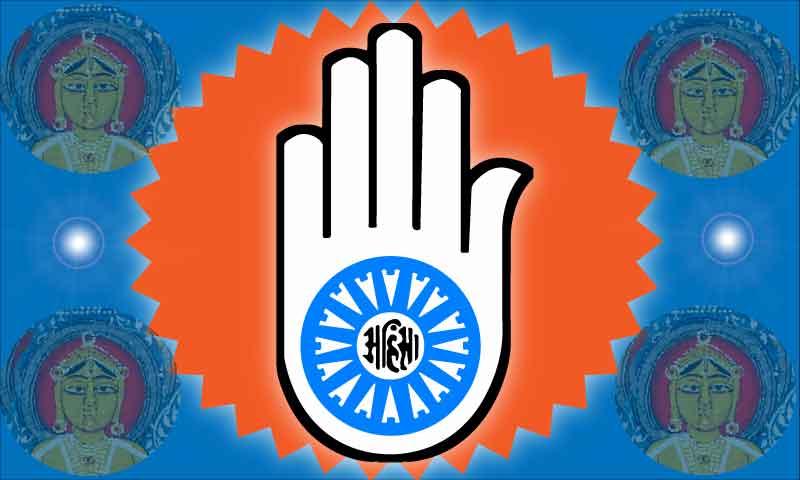 Right knowledge, right faith, and right conduct are the three most essentials for attaining liberation.

In order to acquire these, one must observe the five great vows:

It is repeatedly said by all Tirthankaras in Jain literature,

"Do not injure, abuse, oppress, enslave, insult, torment, torture, or kill any creature or living being."

Nonviolence is based on love and kindness for all living beings. Nonviolence in Jainism is not a negative virtue. It is based upon the positive quality of universal love and compassion. One who is actuated by this ideal cannot be indifferent to the suffering of others.

Violence of every type should be completely forbidden. Mental tortures by way of harsh words, actions, and any type of bodily injuries should also be avoided. Even thinking evil of some one is considered violence in Jainism.

Practically, it is impossible to survive without killing or injuring some of the smallest living beings. Some lives are killed even when we breathe, drink water, or eat food. Therefore, Jainism says that minimum killing of the lowest form of life should be our ideal for survival.

In the universe, there are different forms of life, such as, human beings, animals, insects, plants, bacteria, and even smaller lives which cannot be seen even through the most powerful microscopes. Jainism has classified all the living beings according to their senses as follows:

The five sense are, touch, taste, smell, sight, and hearing.

It is more painful if a life of the higher forms (more than one sense) are killed. All non-vegetarian food is made by killing a living being with two or more senses. Therefore, Jainism preaches strict vegetarianism, and prohibits non-vegetarian foods.

Jainism explains that violence is not defined by actual harm, for this may be unintentional. It is the intention to harm, the absence of compassion, and the ignorance that makes an action violent. Without violent thought there can be no violent actions.

Non-violence is to be observed in action, speech, and thought. One should not be violent, ask others to do so, or approve of such an activity.

Truth (Satya): Anger, greed, fear, jokes, etc. are the breeding grounds of untruth. To speak the truth requires moral courage. Only those who have conquered greed, fear, anger, jealousy, ego, frivolity, etc., can speak the truth. Jainism insists that one should not only refrain from falsehood, but should always speak the truth which should be wholesome and pleasant.

One should remain silent if the truth causes pain, hurt, anger, or death of any living being.

Truth is to be observed in speech, mind, and deed. One should not utter an untruth, ask others to do so, or approve of such activities.

When accepting alms, help, or aid one should not take more then what is minimum needed. To take more than one's need is also considered theft in Jainism.

The vow of non-stealing insists that one should be totally honest in action, thought, and speech. One should not steal, ask others to do so, or approve of such activities.

Celibacy / Chastity (Brahmacharya): Total abstinence from sensual pleasure is called celibacy. Sensual pleasure is an infatuating force which sets aside all virtues and reason at the time of indulgence. This vow of controlling sensuality is very difficult to observe in its subtle form. One may refrain from physical indulgence but may still think of the pleasures of sensualism, which is prohibited in Jainism.

Monks are required to observe this vow strictly and completely. They should not enjoy sensual pleasures, ask others to do the same, nor approve of it. There are several rules laid down for observing this vow for householders.

Non-attachment / Non-possession (Aparigraha): Jainism believes that the more worldly wealth a person possesses, the more he is likely to commit sin to acquire the possession, and in a long run he may be more unhappy. The worldly wealth creates attachments which will continuously result in greed, jealousy, selfishness, ego, hatred, violence, etc. Lord Mahavir has said that wants and desires have no end, and only the sky is the limit for them.

Attachments to worldly objects results in the bondage to the cycle of birth and death. Therefore, one who desires of spiritual liberation should withdraw from all attachments to pleasing objects of all the five senses.

Monks observe this vow by giving up attachments to all things such as:

Feelings: Pleasure and painful feelings towards touch, taste, smell, sight, and hearing objects. They have the equanimity towards music and noise, good and bad smells, soft and hard objects for touch, beautiful and dirty sights, etc.

They do not eat food for taste but for survival with the intention to destroy his karma with the help of this body.

Non-possession and non-attachment are to be observed in speech, mind, and deed. One should not possess, ask others to do so, or approve of such activities.

Jainism has laid down and described in much detail these five great vows for the path of liberation. These are to be observed strictly and entirely by the monks and nuns. Partial observance is laid down for the householders with an additional seven vows.