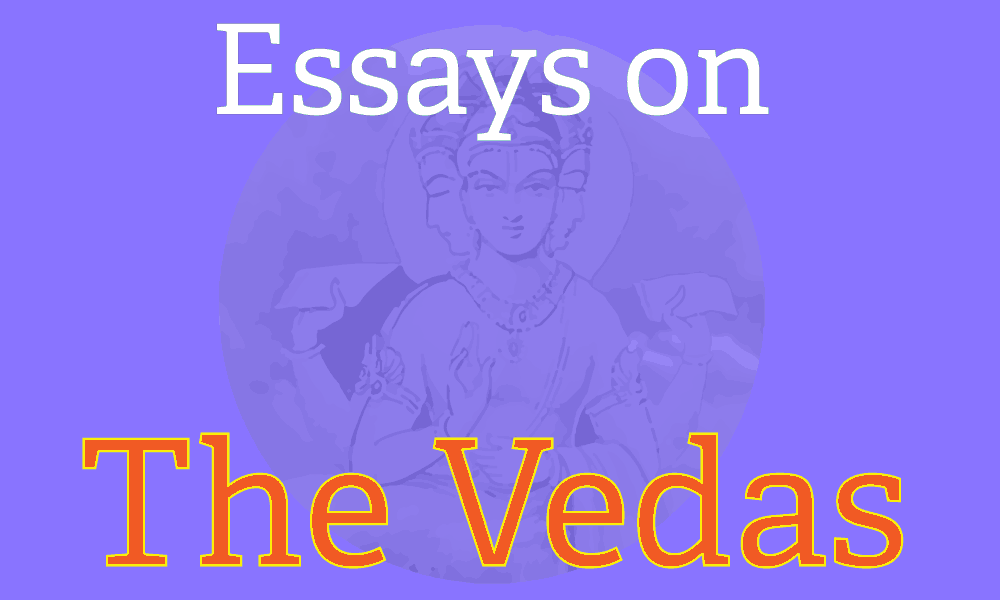 Essays on the Vedas

The Vedas are the main source of Hindu beliefs and practices. Their knowledge is considered the standard knowledge in Hinduism, which means any truth is valid in Hinduism only if it is affirmed by the Vedas. This is the tradition for the last 4000 years or even more. For Hindus the Vedas are inviolable, eternal, and revealed by God for the benefit of the mankind. They are considered sruti, the heard ones, or apauruseya, not man-made. Hindu philosophy and spirituality, including the knowledge of various yogas, are drawn from the Upanishads, which form the end part of the Vedas. They speak about Brahman and Atman and their role in creation. The following is a list of essays about the Vedas and related subjects which are currently available at Hinduwebsite. Jayaram V

About the Vedas and Vedic Literature

Developments in the Early Vedic Tradition

Significance of the Vedas in Life and Liberation

The Vedas as the Source of Valid Knowledge

Aditi, The Mother of Hindu Gods

Informatin about Adityas, the 12 Suns

What is Advaita or Advaita Vedanta?

Agasthya the Hindu Sage who drank the oceans

What is Ahimsa, Non-violence or Non-injury?

Akasa, Ether or The Sky and The Fifth Element

Ananda, the State of Bliss or Happiness

Annam or Food in Hinduism

The Meaning and Concept of Arya

The Origin and History of the Aryans of ancient India

Asvins, the Hindu Gods of Healing and Medicine

The Concept of Avatar or Incarnation in Hinduism

Meaning and Definition of Bhagavan

What is Bhakti or Devotion?

Brahman the Supreme Universal Lord of All

What is Buddhi Yoga?

The Concept of Chakras or Energy Centers Of The Human Body

Citta or Chitta in Yoga and Hindu tradition

What is Citta or Chitta?

Daksha, Daksha's Sacrifice and the Slaying of Daksha

What is Dhyana? Definition and Significance

Rudra, Rudras the Gods of Hinduism

Gods of Hinduism, the Eight Vasus

The Vedangas: The Limbs of the Vedas

Om, Aum, Pranava or Nada in Mantra and Yoga traditions

Brahmacharya or Celibacy in Hinduism

Brahman According to Advaita and Dvaita in Hinduism

Breath or Prana in the Upanishads

Why is Hinduism Called Sanatana Dharma?

Wealth and Duty in Hinduism

Why do we need God? A Lesson From the Mahabharata

The Body as an Abode of Gods

The Symbolism of Time or Kala and Death in Hinduism

The Defintion and Concept of Maya in Hinduism

The Eternal and Temporal Aspects of Hinduism

Page Redirect to History of Sanskrit

Gods of Hinduism - Brahma, the Creator

Dharma, the Moral and Religious Duties of Hinduism

The Ashtadikpalas, Rulers of Eight Directions

What can you do in the service of Hinduism?

Gods and Goddesses of Hinduism

Sects and Sectarian Movements in Hinduism

Hinduism - Gods and Goddess in the Vedas

The Early Western Images Of Hinduism

History of Hinduism - the Ancient Period

The Role of Historians in Indian History

The Religion of the Indus Valley Civilization

Brahman, The Universal Self, The Highest God Of Hinduism

Samskaras, The Rites and Rituals in Hinduism

Significance of Rituals in Hinduism

Symbolic Significance Of The Vedic Gods and Goddesses

Yagna or Yajna - The Sacrificial Rituals Of Hinduism