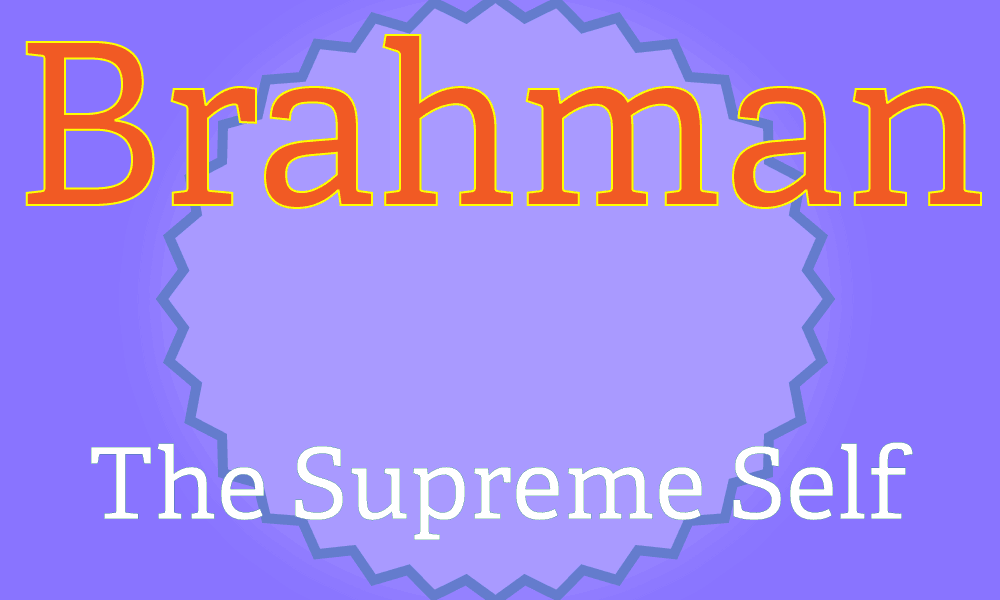 Brahman, The Highest God Of Hinduism

Brahman the Absolute God of Hindus, is a very mysterious Being. In Hinduism He occupies the highest place, as the creator and enjoyer of all creation. He is the Light and Delight of the Universe, the Ruler and the Lord, without a beginning and without an end, indestructible, indescribable, blissfully immersed in Himself and all by Himself. The concept of Brahman and His relationship with individual souls and Nature and His manifestations are the subject of many schools of Hindu philosophy. Some schools believe that He is both the efficient and material cause of creation. Some believe that He is only an efficient cause and that Prakriti is the material cause. There is also considerable speculation about the relationship between Brahman and the individual souls. Some believe that both are the same and some believe that they are different. Presented below are a few articles on Brahmanwhich may help you gain a proper understanding of this Highest and Absolute God of Hinduism, the Ruler of All.

This is the audio version of a chapter entitled "Brahman in Vedic Tradition," from the book Brahman by Jayaram V, published by Pure Life Vision LLC.

The 12 Manifestations of Brahman, the Supreme God of Hinduism

The Essay describes twelve most important and highest manifestations of Brahman, the highest God, and their significance in Hinduism.

Advaita Vedanta the Experience of Oneness

Advaita means non-duality or absence of duality. It is a state of oneness with the rest of creation, of the subject with the object, of the knower with the known, of the lower self with the highest self and of the ordinary consciousness with the higher consciousness. It comes with a heightened sense of awareness in which one sees everything in oneself and as oneself.

Brahman the Supreme Universal Lord of All

Brahman is the central theme of almost all the Upanishads. Brahman is the indescribable, inexhaustible, omniscient, omnipresent, original, first, eternal and absolute principle who is without a beginning, without an end , who is hidden in all and who is the cause, source, material and effect of all creation known, unknown and yet to happen in the entire universe.

Brahman is the very space and the entire universe, with billions of galaxies and interstellar spaces and much more than that. The idea of Brahman probably entered the consciousness of ancient Hindu seers as they contemplated upon the vast expansive sky and the star studded mysterious night skies. The Upanishads present a grand view of this Absolute and highest god of Hinduism. Read the greatness and significance of Brahman from this article.

Belief in One God

There is a misconception among many that Hindus worship many gods and nothing else. To those not familiar with Hinduism, this practice of Hindus appear absurd and primitive. The way Hindus worship gods is different from the way the ancient Hittites or the Mediterranean people worshipped their gods. Know from this article why Hindus worship so many gods and goddesses, but how at the same time firmly believe in the unquestionable fact that God is but one indivisible Supreme Truth.

Why Brahman is not worshipped in Hinduism?

Brahman is the highest God of Hinduism. Yet he is not ritually worshipped. The author explains the reasons.

The Meaning and Concept of Sat in Hinduism

This essay is about the meaning and concept of Sat or Sath, the Supreme Truth or Reality of Brahman.

How Brahman is worshipped in Hinduism?

Brahman is the highest supreme reality who is extolled in the Upanishads. He is not ritually worshipped. This essay explains the right way to worship Brahman on the path of liberation.

Mahavakya - I am Brahman, Aham Brahmasmi

The statement "I am Brahman" is both a postulation on the state of Brahman at an intellectual level and an expression of an enlightened yogi ( Brahmajnani) in a state of self-realization. The first comes out of an insight through study that "I am" is the state of "Brahman". The second comes out of an inner experience that "I am indeed none other than Brahman".

The 24 principles of Creation

It has been said that Samkhya philosophy was the greatest achievement of ancient Indian scholarship. The Samkhyas were originally atheists in the sense that they did not accept the concept of a Supreme creator. But they contributed to Hinduism the concept of Prakriti and evolution of life which was subsequently modified and absorbed into mainstream Hinduism, through such works as the Bhagavad gita, the epics, and the Puranas. Know from this article the twenty four principles of manifest creation.

Brahman as the Highest and the Purest Reality

Brahman is an incorporeal deity. As the highest, the purest and the ultimate reality (brihat-tattvam), he shines in all the best, brightest and sacred manifestations of creation

Brahman is both the unmanifest and the manifest, the formless and the one with form. He is here and beyond. There are four grand aspects of Brahman, which are not known even to many Hindus. What are these aspects? Read this article to know.

When discussing ultimate spiritual topics, it is necessary to keep in mind at all times that words and concepts do not suffice. Any attempt we make to describe the transcendental is ultimately futile, for the boundless cannot be encapsulated within a concept, a word, a name, or a form

Knowledge (jnanam) is of different kinds. There is the lower knowledge of the Vedic rites and rituals, of the smritis, sutras, puranas, darshanas and vedangas, and the higher knowledge of Atman (self) and Brahman (supreme-self).

Aspects, Emanations, Incarnations and Forms of God in Vaishnava Tradition

The Vaishnava tradition of Hinduism recognizes five aspects of the Supreme Being: (Paramatman), which are : Para, the transcendental Supreme Being beyond all. Vyuhas, the emanations of God who reside in the higher planes. Vibhavas, the incarnations of God who appear upon earth from time to time. Antaryami, the immanent being who resides in all beings as a partner of the soul. Arcavatara, the consecrated image of God made out of earthly material, which is worshipped by His devotees as God Himself.

Brahman according to Advaita and Dvaita schools of thought

In Advaita Vedanta, Brahman is without attributes and strictly impersonal. It can be best described as infinite Being, infinite Consciousness and infinite Bliss. It is pure knowledge itself, similar to a source of infinite radiance.

Bhagavan means He who resides or abides in the things and qualities mentioned above. In simple terms bhagvan is God. In symboic terms bhagavan is represented by many objects and forms, famour being "salagrama" and "sivaling".

Gods of Hinduism - Brahma, the Creator

Brahma is the source, the seed and the creator of all beings in this world. At the time of creation, he emerged as the first differentiated consciousness (the first ego) from the primal waters (universal consciousness). He is called svayambhu because in reality none created him. He created himself.

Difficulties in Knowing the Reality of Brahman

Any attempt to explain Brahman to the satisfaction of a mind that is driven by reason and familiar with the concretization of thought is fraught with enormous difficulties, because that which is inexplicable cannot be explained by any amount of reasoning and logic. Brahman is beyond the senses, beyond the mind, beyond our intelligence and dreams... Know from this article why it is so difficult for the human mind to conceptualize the idea and the grandeur of Brahman.

The Advaita Vedanta the Experience of Oneness

Many religions that we know including the atheistic religions such as Jainism and Buddhism are dualistic. So are Judaism, Zoroastrianism, Christianity and Islam.

: A few minutes of prayer, a little attention to God, may be better in a way compared to no religious activity. But if any one believes that it is going to bring him or her face to face with God he or she is badly mistaken. To experience God one has to go beyond the mundane and the ordinary and be prepared to make great demands upon oneself, with unwavering faith and uncompromising discipline.

The State of Brahman And Self-realization

Who is this mysterious Brahman? Who is this Being, whom we call God, who is described so beautifully in the Upanishads, extolled for centuries by seers and sages in the sacred land of the Vedas? This essay explains the MYSTERY OF SELF REALIZATION.

The Concept of Brahman As Priest and As Supreme Self

This article traces the origin and development of the concept of Brahman and his symbolic association with vedic rituals.

God and Self and Their Relationship in Hinduism

This article attempts to explain the relationship between God and individual soul according to the Upanishads.

Vidya and Avidya in Brihadaranyaka Upanishad

Interpretation of Vidya and Avidya, knowledge and ignorance, in the Brihadaranyaka Upanishad

The Wisdom of the Isa Upanishad

God and You in Hinduism

This essays is about Brahman, Atman and His numerous manifestations

Aspects or Manifestations of Brahman are described here as: Non-Being Iswara, Hiranya Garbha and Viraj

Why do we need God? A Lesson From the Mahabharata

Find out how you can make God your partner, mentor, guide and guru and lead a divine centered life in the service of God

What is Your Notion of God?

Worship of one God, Monotheism in Hinduism