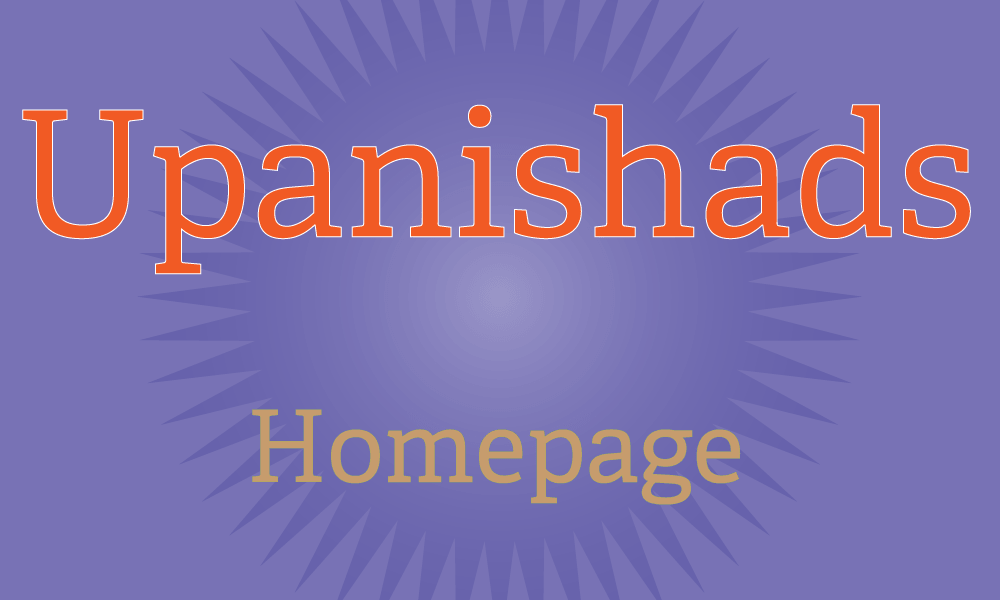 In the whole world...there is no study...so beneficial and so elevating as that of the Upanishads. They are products of the highest wisdom. They are destined sooner or later to become the faith of the people." Schopenhauer.

"We have to remember that the highest religion of the Upanishads, which insists on meditation and morality and worship of God in spirit and in truth, is not encumbered by such traditional dogmas and miracles as still hang upon the skirts of other religions. Its central principle that there is one supreme reality that manifests itself in the universe is not asserted as a dogma. It is the ultimate truth at which it is possible for human understanding to arrive. The progress of science and philosophy does not conflict with it but only confirms it." S.Radhakrishnan

The Upanishads are at once profound religious scriptures, - for they are a record of the deepest spiritual experiences, - documents of revelatory and intuitive philosophy of an inexhaustible light, power and largeness and, whether written in verse or cadenced prose, spiritual poems of an absolute, an unfailing inspiration inevitable in phrase, wonderful in rhythm and expression. Sri Aurobindo

The Upanishads have the potential to ignite the flame of knowledge in the minds of seekers of knowledge. If you are in-terested in becoming a spiritual person and develop higher knowledge, wisdom and sensitivity towards the world and yourself, then the Upanishads are the best choice for you. Jayaram V

Essays on the introduction, meaning, significance, historical background, philosophy and concepts of Upanishads with detailed exposition of subjects such as Atman and Brahman, the dvaita and advaita views on Brahman, lists of Upanishads, manifestations of Brahman and so on.

You will find here information on Brahman, the Supreme Self and the Highest God of Hinduism, extolled in the Vedas, who is without a beginning and end and who is the creator of all and who exists in us as our inner-self or Atman.

Vedanta is another name of the Upanishads. It also represents a school of philosophy based upon them. Hinduwebsite has many essays on Vedanta, some of which are listed here. They will help you understand the significance of creation and our place in it.

Mahavakyas means great sayings. They are useful in meditation, contemplations and to gain insight into the knowledge and wisdom of the Upanishads. This section lists well known mahavakyas and presents a few articles explaining their meaning and significance.

Atman means the Self, or the breathing one. He also goes by other names and one of the constant and recurring themes of the Upanishads. The knowledge of Atman leads to liberation. We have presented some very thoughtful essays on the nature and significance of Atman in Hindu spirituality.

The Bhagavadgita is also considered an Upanishad since it also speaks about Atman, Brahman and liberation. This section contains several articles about the truths, concepts, symbolism, and philosophy found in the scripture.

This section provides essays on spiritualism, the practice of spiritualism, the meaning and significance of divine centered living, developing the right spiritual attitude that would lead to better awareness and divine orientation, scriptures and more.

You will find here a huge collection of links to websites on Hinduism, and related subjects. Additionally, you may also check our internal links using the site search in the right column.

You will find here Links to online merchants, shops, malls, products, deals, discounts, and coupons from hundreds of merchants in various categories.

Check these links to exceptionally good books available for purchase on Hinduism, Buddhism, and related religions. Hinduwebsite also published several books, which you may check by clicking here.

This is an information center for the news headlines, events, jokes, cooking recipes, latest film reviews, stock quotes, horoscope, health information and more. Get a variety of information in one place.