Suffering and its Solutions in Indian Mysticism 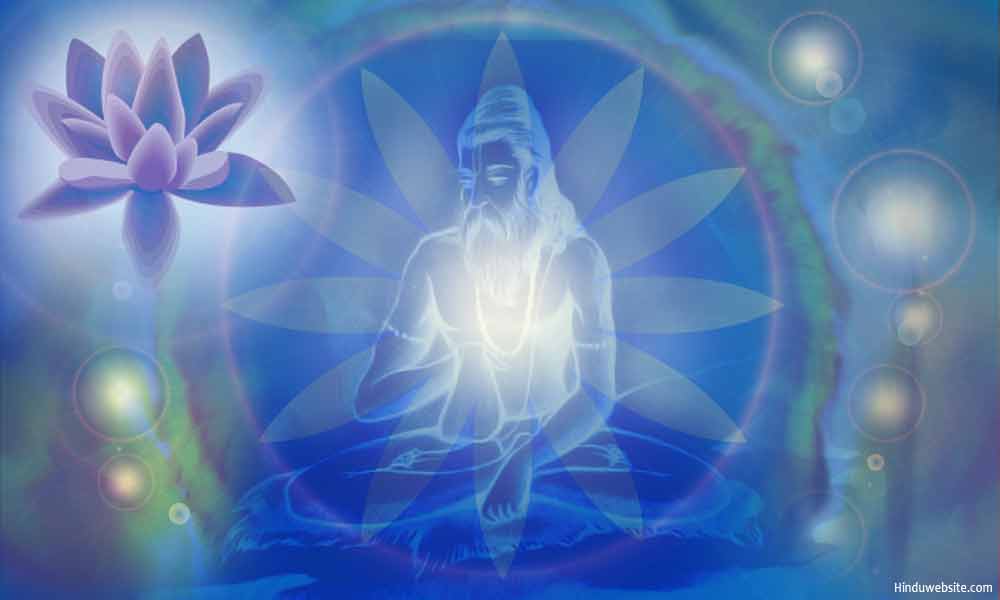 Suffering arises when the organs of the body are used in selfish pursuits. Jayaram V

Living solely for yourself ignoring your obligations to others and to God is the source of all misery. Jayaram V

Imagine life in the Indian subcontinent five or six thousand years ago. The land was cut off from the rest of the world and was surrounded by sea on three sides. It had a varied climatic zone, with unpredictable and erratic weather conditions. Geographically, it stretched from the world's highest mountains in the North to the world's largest ocean in the South, and forest covered hilly tracts in the East to semi-arid lands and sand dunes in the West. There were swamps, arid zones, deserts and impenetrable forests. Hardly, a million or two million people lived in that region. They practiced different professions and belonged to diverse social and racial backgrounds. Most of them were new immigrants and adventurers in search of a new life and a new beginning. Life was tough and brutal in a land that was shaping itself as the home to an emerging multiethnic, pluralistic society.

The land was covered with thick tropical forests, inhabited by some of the world’s most dangerous predators such as tigers, lions, bears, hyenas, most poisonous snakes, crocodiles, and cheetahs. Traveling through them was like inviting death. Death was so common that people hardly lived beyond the age of 50. Infant mortality was probably the highest as there were no effective cures for many illnesses and diseases. Frequent wars, invasions, mass migrations, robberies, diseases and natural calamities took a heavy toll on the lives of common people and their peace and happiness. They lived in fear and saw the dance of death everywhere. Suffering was acute and an integral part of their daily lives.

Indian religions, philosophy, and mysticism originated in such circumstances, where people had a little respite from suffering and the fear of imminent death. It was the time when common people suffered from the cruelty of Nature and of humans and made sacrificial offerings and prayers to gods in search of peace and happiness, while wise minds, having retired from the obligations of worldly life and freeing their minds from the temptations of sensuous pleasures began looking for lasting solutions to the problem of suffering and finding freedom from it. They were not much interested in mere speculative ideas and the subtleties of elitism, but for real and practical solutions which could be validated through human experience.

They were mystics of great wisdom the world had never seen before, as if they were directly born from the mind of Brahma, the creator of the world and the source of the Vedas. Driven by a cause which was greater than themselves, attuning themselves to the highest and the purest of the universal consciousness, they wanted to help people escape from the hardships of life without disturbing the orderly progression of society or avoiding their duties and responsibilities. They wanted people to be free from the bonds of life, without being rigid and dogmatic. Their pioneering effort led to an explosion of spiritual and religious thought in ancient India, whose echoes still reverberate in the country. It was a unique event in the history of the world, whose spiritual and transformative value only a few enlightened and awakened people can truly understand.

Dharma, the eternal Wheel of natural order of things

Vedism, Samkhya, Yoga, Vaisheshika, Buddhism, Jainism, Shaivism, Vaishnavism, Shaktism originated in such a climate. Because of their common history and identical features, they can be collectively grouped under the generic title, Dharma or Bharata Dharma1. They all have one common objective, how to escape from pain and suffering and experience peace and happiness in the mortal body. They acknowledge lasting happiness (or bliss) as the highest human goal, believe in its possibility, and prescribe in their individual ways how to achieve it. In their quest for solutions to human suffering they identify its main causes and emphasize the following truths, which are worth examining. Readers may note that many specific details and particularities of each Dharma have been excluded in formulating these generalizations since the nature of this discussion does not permit to include them all.

Thus, the ancient Indian seers and spiritual masters observed that the solution to suffering was hidden in the causes of creation and in the ebbing and flowing principles of Dharma. They envisioned Dharma as the eternal wheel of life which revolved like the disc of Vishnu, the Preserver, or the effulgent sun in the sky. It was the source of all light and wisdom. If there was a problem with its functioning and progression, one should fix the wheel of Dharma by practicing virtue and restoring its eternal laws so that the world would move on smoothly like a chariot on a golden path. They also envisaged it as the heart of creation, whose regular beat ensured the order and regularity of the world. When it faltered, it imperiled the whole existence.

The essence of Indian mysticism

Their findings became the crux of the Upanishads, and the moral and philosophical percepts and teachings of the Buddha, the Jain Tirthankaras, Ajivikas, Smartas, Shaktas, Shaivas, Vaishnavas, Tantras, Agamas, Smritis, and numerous other ascetic, teacher and sramanic traditions, most of which were lost or now lay hidden beyond recognition in Hinduism as its very core. It also led to the emergence of Indian mysticism, which is very distinct and unique, and which because of its esoteric nature remains largely unknown and secretive.

Indian mysticism is very complex and diverse since it is an amalgamation of numerous historical processes and dharmic traditions. Western scholars rarely understood it, since to know it you need spiritual practice and inner awakening rather than academic learning and you must have access to the teachers who are willing to teach it. In continuation of a long tradition, generally they do not reveal it unless the students qualify. Although the various mystic traditions of India explored the problem of human suffering in their individual ways, they have a few common features and approaches to transcend the problem of mortality. They are as stated below.

Thus, in essence Indian mysticism is about restoring your internal Dharma (which is to be pure or God like or God himself) to overcome suffering. You can regain your blissful and happy state by remembering and returning to your original Dharma or your essential, natural state of pure consciousness. Liberation is a sudden awakening to a forgotten truth about who you are or have always been. To restore Dharma which you have lost sight of and to destroy the evil that accumulates in you like an impurity, you should become a disinterested observer of your life and the world rather than becoming involved with them. Further, to ensure the order and regularity of the world within and without, you must do your part in the play of God, without taking it for real and without losing yourself in it.

You cannot end the suffering in this world, but through detachment and renunciation of desires you can end your reaction to it and your involvement with it. When you are inseparable from your mind, you become the victim of your own egoistic actions, but when you silence the mind, it falls off, whereby you only remain as the pure observer of all that happens. Therefore, the best way to live here is to live like a lotus plant, untouched by the waters of life, yet drawing your nourishment from it, and letting your consciousness bloom like the beautiful, thousand petalled flower with its face turned towards the Sun. The whole process is beautifully explained in the following passage by S.N. Dasgupta. 2

The self is the ultimate principle of pure consciousness, distinct from all mental functions, faculties, powers, or products. By a strange, almost inexplicable, confusion we seem to lose touch with the former so that we consider it as non-existent and characterize the latter with its qualities. It is this confusion which is at the root of all our psychological processes. All mental operations involve this confusion by which they usurp the place of the principle of pure consciousness so that it is only the mind and the mental operations of thought, feeling, willing, which seem to be existing, while the ultimate principle of consciousness is lost sight of. If we call this ultimate principle of consciousness, this true self, "spirit" and designate all our functions of knowing, feeling, and willing collectively as "mind," then we may say that it is only by a strange confusion of mind with spirit that the mind comes to the forefront and by its activities seems to obscure the true light of the spirit…What is necessary, therefore, is to control the activities of the mind and to stop all mental processes. If we can in this way kill the mind, all logical thought and all sense processes will be killed with it. The light of the spirit will then shine alone by itself unshadowed by the darkening influence of thought.

1. The name Bharata Dharma was first proposed by Arthur Avalon (Sir John Woodroffe) in his work, Shakti and Shâkta, Essays and Addresses on the Shâkta Tantrashâstra. He wrote, “It has been asserted that there is no such thing as Indian Religion, though there are many Religions in India. This is not so. As I have already pointed out (Is India Civilized?) there is a common Indian religion which I have called Bharata Dharma, which is an Aryan religion (Aryadharma) held by all Aryas whether Brahmanic, Buddhist or Jaina. These are the three main divisions of the Bharata Dharma.” In today’s world one may not agree with the naming of the Dharma as an Aryan Dharma, because of its racial overtones, unless the word Aryan is used in a very native sense to denote Indian nobility. However, the name Bharata Dharma truly represents the Dharmas or faiths that originated in India.