Jnana Yoga or The Yoga of Knowledge 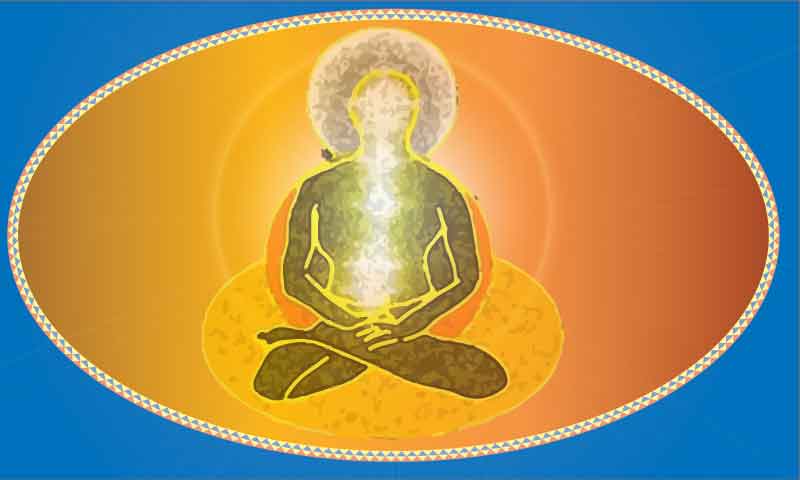 If we accept the theory that the purpose of incarnation of God on earth is to restore dharma (4.7), then it is equally possible and probably true that Lord Krishna might have also attempted to remove through the Bhagavadgita the disorder and confusion prevailing in the Vedic religion of puranic (very ancient) times.

In the Bhagavadgita, Lord Krishna brought various divergent schools of thought under one common teaching and integrated them finely into one scripture, simple to follow and easy to understand. Indeed The Bhagavadgita is a compendium or compilation of various schools of thoughts of ancient India, which have been blended quite dexterously and vibrantly into one body of knowledge, so that the Vedic seer interested in spiritual quest, the erudite priest inclined to the performance of yajnas and the common devotee seeking simple faith and devotion, could all draw inspiration and guidance from one source to achieve their spiritual goals.

The path of knowledge practiced by the Vedic seers through austerity and contemplative mysticism, the path of action followed by the pragmatic and the Vedic priesthood still attached to the attractions of the materialism and the magic of religion, the path of devotion followed by the common lot inclined to prayer and simple worship of various gods and elements were all brought together into one single stream of knowledge without excluding or undermining the importance of any of these paths. The Samkhya school of philosophy has been represented by Lord Krishna in the second chapter of the book in the light of the Vedas and the Upanishads. The Samkhya yoga of the Bhagavadgita has the touch of the Vedanta and the fundamentals of the Samkhya. The details of both schools have been finely integrated in the second chapter titled Samkhya Yoga.

A sincere student of the Bhagavadgita would realize that chapter after chapter Lord Krishna enjoins the devotees to develop an all round perfection and purity of the mind, the body and the behavior or conduct to achieve salvation. As we read the Bhagavadgita again and again, it becomes clearer and clearer to us that what Lord Krishna is advocating is an all round development of the devotee for an easy, and speedier salvation.

The body, the mind and the actions all need to be perfected in their respective spheres and integrated before the devotee can have a true vision and experience of God. In fact in the Bhagavadgita He laid bare this idea in one chapter (Chapter II) under the heading "Samkhya Yoga" by summing up in that chapter the entire teachings of the Bhagavadgita. ( The words "Samkhya yoga" seems to stand for "Jnana yoga", meaning "the path of divine knowledge")

The entire teaching of Lord Krishna can be truly termed as Jnana Yoga or the yoga of Knowledge, for in reality the Bhagavadgita is but a book of divine knowledge, the words as spoken directly by the Supreme Self Himself. In this Supreme Knowledge, He describes mainly three ancillary paths by following which simultaneously and achieving perfection an aspirant can achieve self-realization.

It is pertinent to note here that through the teachings of the Gita, Lord Krishna tried to restore the balance that had probably been lost in the practice of the three paths of spiritual science known to the ancient Indians.

To the Vedic seer who was intent upon realization of Brahman through austerity and penances, by renouncing ordinary life and activities and there by escaping into self-induced seclusion, to the Vedic priest who was more inclined to the performance of rituals and sacrifices as a means for seeking divine help for the fulfillment of material desires without the corresponding inner purity and wisdom, and to the ordinary devotee who was conditioned to worship various gods, spirits and objects of nature as a means to fulfill earthly desires and attain heavenly comforts, without corresponding mental discipline, inner purity and sincerity in devotion, the Bhagavadgita aimed to teach them all the need to restore the balance that had been lost in their respective paths.

It advocated quite convincingly the need for integral practice for self-realization by fusing together the brighter aspects of these three paths into one single harmonious radiant path. It was the fusion of these three into one meaningful approach to the Divine, which perhaps made the Bhagavadgita the most popular scripture among various sections of Hindu society.

The three paths are so deeply inter related that perfection in only one path at the exclusion of the other two is neither desirable nor possible. This becomes clearer as we read the Bhagavadgita and try to understand the qualities expected of us by Lord Krishna to practice the three paths perfectly.

It is commonly held belief that by merely practicing devotion one can attain salvation. But this is rarely true. Unfortunately this erroneous view tends to make the devotees irresponsible and devoid of any effort physically, mentally and spiritually. It frees the devotee from assuming any responsibility towards himself, his inner purification and pure conduct.

By the easy manner in which it pretends to offer Salvation to people, this erroneous view of some half hearted bhakti yogis unfortunately attracts many people into its fold and there by prevents them from making any serious attempt towards self-purification. It tends to degenerate in the process into impure and imperfect devotion expressing itself in the outward forms of emotional exuberance, hypocrisy, ostentatious display and empty ritualism .

Devotion is indeed the easiest path for achieving salvation. It is however not so easy to practice. A true devotee is rather the culmination of all spiritual endeavor and past practices. He is the end product. True devotion, which is but unshakeable faith and unconditional love for God, comes only after one has purified and perfected himself innerly through the acquisition of correct knowledge and after performing selfless and desireless actions for the welfare of the world. True devotion (unshakeable faith and unconditional love to God) without inner transformation and purification of the mind and body is simply not possible.

There are many verses in the Bhagavadgita which confirm this belief, like for example, the following verses from Chapter 12. See the emphasis here for a true devotee on equanimity of the mind, control of the senses and desires, absence of egoism and performance of desireless actions

"Without any hatred towards all beings, friendly and compassionate, without any sense of possessiveness, without any egoism, equal in pleasure and pain and forgiving.

"The Yogi who is always contended, self-controlled, strongly determined, his mind and intelligence offered to Me, that devotee is dear to Me.

"Equal to friend and foe, in honor and dishonor, heat and cold , pleasure and pain and equally free from all attachment.

"Equal to being criticized or praised, silent, contended with whatever he has, without a fixed abode, stable minded, engaged in devotion- that devotee is dear to Me.

"But who follows completely the immortal dharma (righteousness) as ordained, with faith, holding Me as the Supreme such devotees are exceedingly dearer to Me.

Again we come across these verses in Chapter 18.

"Now try to understand from Me in brief, O Kaunteya, how one who has achieved perfection can attain Brahman, the highest state of knowledge and transcendence.

"With intelligence purified, engaged in self-control with determination, giving up the sense objects such as sound etc, setting aside hatred and attachment.

"Residing in solitary places, eating lightly, restraining speech, the body and the mind, always engaged in transcendental meditation and sheltered in detachment.

"Freed from egoism, force, arrogance, desire, anger and greed fro material things, without possessiveness, peaceful - such a person is qualified for realization of Brahman.

"Attaining Brahman, immersed in bliss, he neither thinks nor desires, equally disposed towards all beings, he gains My Supreme Devotion (attention).

"Through devotion, he realizes Me, all that is to be known about Me in truth. Knowing Me thus in truth, he enters into Me.

"Although engaged always in actions, under My protection, by My Grace, he attains the eternal and imperishable Abode.

"Mentally renouncing all actions to Me, under My protection, through buddhi yoga (equanimity of mind), he becomes established in My consciousness always.

"With your mind fixed on Me, through My mercy, you will overcome all obstacles. But if you do not listen to Me due to egoism, you will perish."

Thus in summary it can be concluded that the Bhagavadgita mainly brings into our focus the three main paths of Vedanta by practicing which one can attain salvation.