The History of Idol Worship 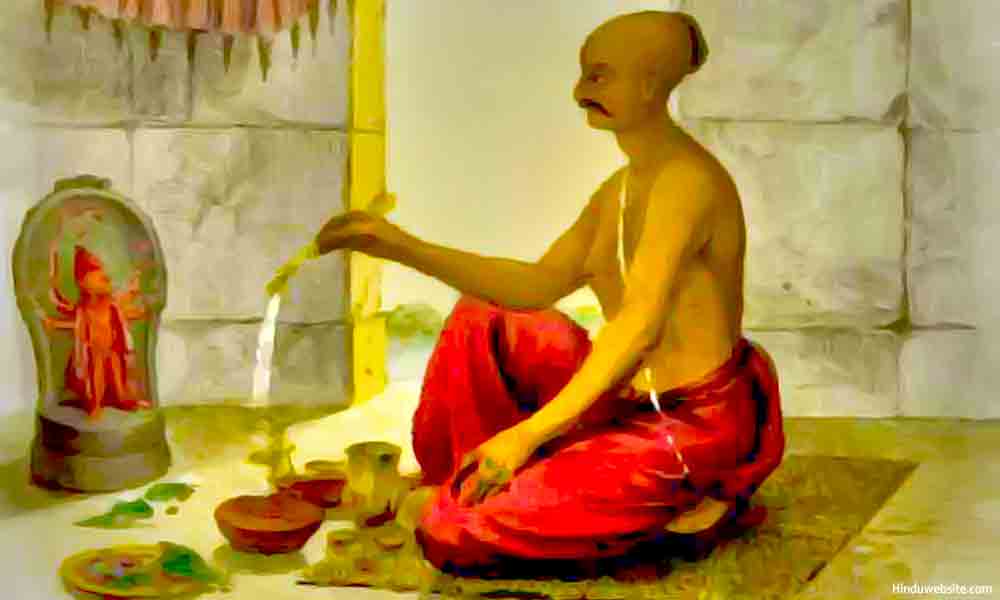 Vedic people did not worship images or idols. They worshipped gods through prayers, chants, songs, rituals and sacrificial ceremonies. They envisioned them as divine entities who manifested upon earth as forces of Nature. However, it is also true that they envisioned them with specific names and forms, who in many respects behaved like humans and possessed the same strengths and weaknesses. While they possessed enormous strength and powers, they also depended upon humans for nourishment.

The Puranas suggest that Gods and humans supported each other and often fought battles together. Gods helped worshippers who propitiated them win victories against their enemies, while kings often ascended to the heaven and helped gods win celestial wars against demons. Gods lusted for mortal women and humans sought the company of celestial nymphs.

Often it resulted in curses, conflicts, miracles and even the birth of divine children who possessed the qualities of both gods and humans. Besides ritually worshipping gods, Vedic people held certain symbols and geometric patterns as sacred and used them in ritual worship. Thus, although they did not worship images of gods the seeds of image worship were latent in their tradition.

The practice of worshipping images or idols of gods and goddesses might have become a part of ancient Vedic religion through non-Vedic traditions such as tribal practices, Shaivism, Vaishnavism and Shaktism. Ancient humans and the early settlers who lived in the Indian subcontinent erected monoliths and believed in their magical powers. They buried their dead and probably believed in some form of afterlife. They might have worshipped their ancestors or elder spirits.

The Indus Valley people seemed to have a tradition of honoring their deities in image form with ritual worship. They also probably worshipped animals, mythical creatures, plants, kings and gods who resembled humans. According to historians, the practice of worshipping fertility gods and goddesses, ritual bathing, and the use of stone symbols, icons and images in their worship was probably prevalent in the Indus Valley urban communities.

Vedic people did not build any temples to house their gods. For them the sky itself was their abode. However, there are some indications that a few communities in the South erected temples in honor of their gods, whom they equated with king (Koor) and called the temple Koil, or God’s house. The temples were originally built with wood.

The practice of using stone in the building of temples came much later. The earliest temples were probably built in honor of the local deities who were subsequently identified with Shiva or Vishnu as their aspects or manifestations. The tradition of building temples to house gods probably emerged from the early cave temples which are found in several parts of India.

The puja ceremony, or the rituals associated with domestic worship, in which gods are treated like houseguests and worshipped with flowers, incense, fruit, water, sandal paste, etc., also seem to have its origin in the South. Pu is a Dravidian word meaning flower. Puja was a devotional service with the offering of flowers just as Homa which was originally a Vedic sacrificial ceremony with the offerings of ritual food.

Rural people in in remote parts of India traditionally worshipped for a long time idols, statues, symbols or images of village deities (grama devatas), snakes, rivers, mountains and trees to appease them and seek their blessings for a good harvest or protection against calamities and diseases. The deities were mostly left in open, without a shelter, and worshipped on specific occasions. Sometimes, instead of images, they simply worshipped stones or mounds, which were probably remnants of ancient monoliths. The worship of villages deities, serpents and trees still continues in many villages of India.

It is possible that in some parts of Western India, near the mountainous regions, people might have picked up the practice of image worship from Bactrian Greeks, Persians or from the Shamanic traditions of Central Asia. R.C.Majumdar, in An Advanced History of India, stated the following.

“With the growth of anthropomorphism came the increased use of images and the construction of temples for daily services. Icons were known to the ancient people of the lower Indus Valley, and stray allusions to images have been traced in some Vedic texts. But the first undoubted historical reference to image worship by an Aryan tribe occurs in a passage of Curtius, who states that an image of Heracles was carried in front of the Paurava army as it advanced against Alexander. Patanjali refers to the exhibition and sale of images of Siva, Skanda, and Visakha by the Mauryas who rose to power at the end our period. Temples of a primitive kind are mentioned already in the Satapatha Brahmana, but these were not meant for iconic worship. In the epic, however, we have clear references to temples sacred to deities."

Whatever may be the reason, by the time Buddhism became popular and the Mauryan Empire was firmly established, image worship was a universal practice in the Indian subcontinent. Megasthanese, the Greek Ambassador to the court of Chandragupta Mauyra, mentioned people carrying images in procession in his extant work, the Indica. The emergence of Tantra in both Hinduism and Buddhism and the popularity of Bhakti in Shaivism and Vaishnavism must have also contributed to the growing acceptance of image worship among the Vedic communities.

Image worship became central to Hinduism and the tradition of large scale temple construction under royal patronage began in the post Mauryan period and picked momentum during the Gupta Period. It continued for at least a 1000 years during which great temples were built not only in the Indian subcontinent but also abroad as far as Malaysia and Thailand.

While only a few people from the higher castes could afford to host Vedic ceremonies, image worship offered a convenient, inexpensive and easier alternative. Besides, it helped common people directly worship their gods without the need for caste based, expensive priestly intervention. Today, image worship is the most distinguished form of devotional worship in Hinduism. Hindus have carried it to various parts of the world. Huge temple and statues of gods and goddesses sprung up in varoius parts of India. Carrying the images in large public processions is now part of many Hindu festivals. The practice helps devotees bond with their deities and hold them in high esteem. People carry the images of their gods not only mentally or spiritually in their minds and hearts but also physically in their vehicles, purses, bags, lockets and chains, tattoos or digitally in their mobile phones, computers and laptops.