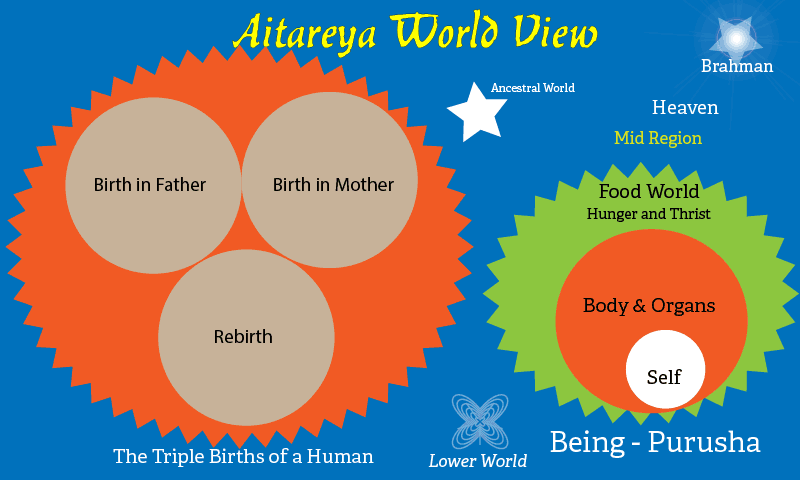 The Aitareya Upanishad reflects the beliefs, practices and philosophical notions of the early Vedic period regarding soul, creation, birth and rebirth. The verses provide information about the early Vedic beliefs regarding the arrangement of a four-tier universe, creation of beings, the embodiment of the Self, the importance of food and desire in the continuation of the worlds and beings, the transmigration of souls, the nature of Self, the manifestations of Brahman as intelligence, and the idea liberation. A summary of the three chapters of the Upanishad is presented below.

The First chapter deals with creation and describes how the worlds and beings emerged from the Self in the beginning when it was alone and desired to have company. It further states that after the worlds were created, the Brahman created the cosmic Being, Purusha, by first creating various organs. Later, he established them in the body and subjected them to hunger and thirst so that they would engage in worldly activity to seek nourishment and survive. The Self was able to do all this with the help of the energy that was generated from doing penance (tapas).

After the organs and the body were created and after they were made susceptible to hunger and thirst, he created food. To enable the body secure food and digest it, he created breath, the lord of the organs. Breath not only helps the body grasp the food from outside but also digest it inside. It also facilitates the distribution of the digested food to various organs in the body.

After creating the body and making it fit for life, and ensuring its survival with the help of breath and food, finally, he entered the body through an aperture in the head and became embodied in three places, the eyes, the mind, and the heart. Thus, you can see that the first chapter is entirely dedicated to how the embodied selves manifested upon earth and how the body and the soul are part of God’s design to ensure the continuity of the embodied souls upon earth.

The second chapter describes the triple births of humans, or how they go through the process of rebirth upon earth. The first birth happens when the Self that is destined to take birth upon earth as part of its karma enters the body of the father through food and water, and settles in his semen. The second birth takes place when he enters the mother’s womb through sexual union and becomes part of the fetus. Finally, he is born third time when emerges out of his mother’s womb after nine months and enters the mortal world.

According to the Upanishad both father and mother play an important role in the birth of a child apart from gods and destiny. Before the reincarnating soul enters the father’s body, gods and Nature facilitate its reentry into the earth from the heaven, while its birth in a family happens according to its karma. The Upanishad makes it clear that while the mother bears the fetus in her womb, the father also plays an important role in the cycle of birth and rebirth as the carrier of the soul.

The second chapter deals with the birth of an embodied soul, whereas the third chapter deals with its departure from this world and return to the ancestral world. The souls, who are caught in the cycle of births and deaths, are subject to numerous rebirths according to their deeds until they achieve liberation. To achieve liberation one should know the nature of the Self, which is ungraspable by the senses but responsible for the function of the organs in the body.

Thus, in three chapters the Aitareya Upanishad describes how the Self manifests, how souls enter physical bodies and become subject to hunger and thirst, how the embodied souls continue their existence in the mortal world going through numerous births and deaths, and how in the end they become wise, cultivating discernment, and attain liberation.

From an academic perspective, the Upanishad is useful to understand the development of the early Vedic ideas of rebirth, reincarnation, Brahman, and liberation. The source of the Upanishad is an Aranyaka from the Rigveda. Hence, it was primarily meant to serve the forest dwellers (vanaprasthas) as a guide for contemplation. It presents Brahman as supreme intelligence, and thereby emphasizes the importance of cultivating intelligence and mental purity as part of one’s spiritual practice.

The following is an early translation of the Upanishad done by me. This is not an exact word to word translation, but does adhere to the original meaning of the Verse. For convenience, the translation is presented in four parts.

The Composition of Aitareya Aranyaka